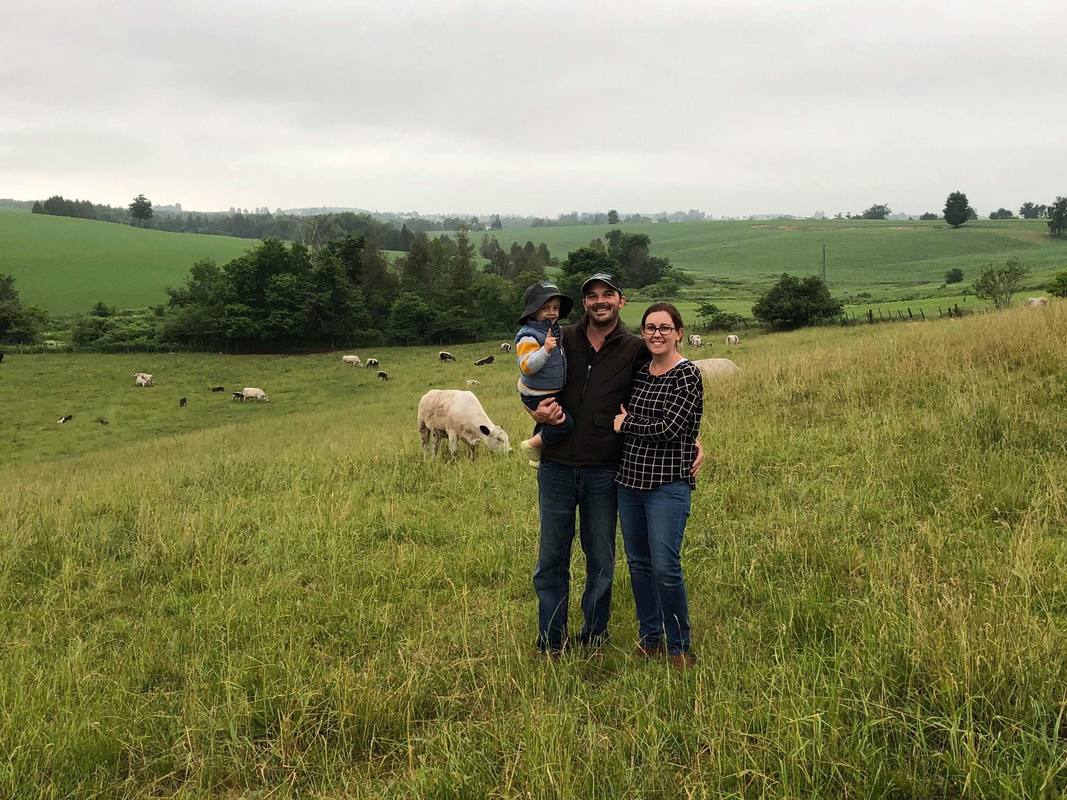 We are a young family with big aspirations!

Panorama Farms Speckle Park is the culmination of a shared love for cattle, passion for agriculture and vision for our family that is owned and operated by Timothy, Naomi and our son Harrison.

Our joint venture into farming began with the purchase of a mob of Charolais cows with calves at foot in 2013. We didn’t have any land of our own at the time so we kept them on agistment while continuing to work our day jobs and saving for a farm deposit. In 2014 we finally signed the dotted line and purchased a property of our own; it was run down and needed a lot of work but we could see potential.

Later that year, with the purchase of our first three foundation females from Wattle Grove Speckle Park, we established Panorama Farms Speckle Park and haven’t looked back. Since then, we have welcomed our first child, built a house and moved out of our caravan, grown our herd numbers and developed great working relationships and partnerships with other breeders in Australia and Canada.

2018 was a year of firsts for our little family; we had calves arrive from our first on farm embryo transfer program, sold bulls in a feature sale off-farm for the first time, made our first trip to Canada and expanded our sale offerings to include semen and embryos.

We have spent our lives working on the land and strive to continue learning and improving our management practices to reach higher levels of productivity, profitability, sustainability and animal welfare within our own business. Our investment into agriculture and the Speckle Park breed has not been done half-heartedly and we envision a strong future for our family within the Australian cattle industry and as producers of both pure bred and commercial Speckle Park cattle.

TIMOTHY
Timothy had an early introduction to farming and food production, growing up within his families mushroom farm and beef cattle enterprise in Rathdowney in South East Queensland. He became a trade qualified panel beater and ran a successful panel beating business in the area for several years before relocating to Grafton, NSW, where he purchased his first property and began cattle farming full time. After a number of years on the coast, Timothy headed over the ranges to take on a farm contracting role, managing day-to-day operations for an irrigated and dry land cropping enterprise South West of Gunnedah in NSW. Timothy is passionate about sustainable and regenerative farming practices and is constantly looking for better ways to improve the soil function and productivity of our grazing enterprise. He is our resident Jack-of-all-trades, we're yet to find anything that he can't envision, plan and build and his knowledge of land management, livestock and crop production are an incredible asset to the day-day running and long-term planning of our business.

NAOMI
Naomi is a 4th generation beef cattle producer; she followed her passion for cattle production and agriculture through her tertiary studies and holds a Bachelor of Animal Science with Class 1 Honours. Naomi's studies focused on production animal health, nutrition, reproduction and meat and fibre science. In her final year of studies Naomi completed an honours research project which examined the impact of a previously undetected organism on the reproductive health and fertility of bulls in Southern NSW and Northern VIC, specifically relating to it's impact on semen quality and function, which was later published in the Australian Veterinary Journal.
In 2011, Naomi participated in the Australian Intercollegiate Meat Judging Competition and was selected as a member of the 2012 Australian National Meat Judging Team. In addition to gaining insight into the Australian red meat industries, Naomi spent 4 weeks touring the United States learning about the US beef, pork and lamb industries and competing in collegiate meat judging competitions.  For the past two years Naomi has been a steward for the Royal Agricultural Society of NSW assisting with carcase judging for the Sydney Royal Show pure bred and trade steer classes.
Naomi was a graduate feedlot management trainee with JBS Australia before moving to Far North Queensland to work in grazing land management with the Norther Gulf Resource Management Group and has worked in livestock extension within North West NSW for the past 5 years.